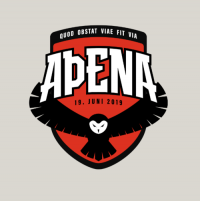 Athena is a Greek goddess of wisdom and military strategy. She is the daughter of Zeus and Metis, and one of the twelve Olympians. She is a goddess of wisdom, strategy, weaving and various crafts. The story goes that upon her arrival in the world, Zeus had eaten Metisa just before she was to give birth to Athena. Soon after that, Zeus got a big headache, which caused the other gods to pierce his head, from where Athena jumped out in full armor with a great shout.

Today, a new logo was launched for Athena. The design was based on an effort made by several artists who each took the design from one another to the next level. The designers were asked to include three elements in addition to the name in the design. First, the Athena motto must be mentioned. “QUOD OBSTAT VIAE FIT VIA” which means in English: “When the obstacle becomes the way”. The phrase is in the spirit of the stoic philosophy and is particularly well-suited to the origins and reasons of the founding of Athena.

Athena is the protector of the Greek city of Athens and its temple on the Acropolis hill. Her companion god is Nike. Her main hallmarks are armor, shield and owl. But the owl is featured in the sports club’s logo.

Often, the founding years of companies can be found in their logos but dates less frequently. But since the founding of the club is dated on the Women’s Rights Day in Iceland and the spirit of equality struggles is big a big part of the establishment of Athena, it was appropriate to have the date on the mark.