For the past two years, all Athena-UMFK teams have practiced and played their home games in Kjalarnes, but the sports center there does not meet the requirements for competition in the senior women’s league. After the Reykjavík Sports Association announced that no home court could be found in a sports hall in the capital area, it seems there is no other alternative than to  look to the neighboring municipalities.

It is unfortunate for the women’s senior team that it has proven impossible to find free time slots in regulation compliant sports centers  in Reykjavík at 5 pm on Saturday nights. Athena still hopes that, in collaboration with the Reykjavík Sports Union, a solution will be found later this winter and for the coming seasons. It weakens the team’s competitive position that fans have to travel a long way to support the team at home games.

Athena accepted Akranes’ invitation, due to location and a long history of collaborations, and will play its home games in the senior women’s league in the sports hall at Vesturgata in Akranes. Even though the team at Akranes is growing and their facilities are in high demand, it proved easy for them to lend Athena a court on Saturday nights, since the youth groups have finished their training at that time.

Athena thanks the town of Akranes for their kindness and help in this matter. 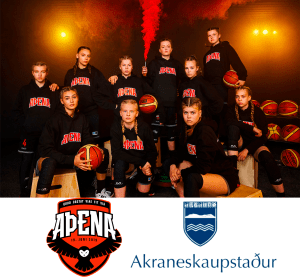